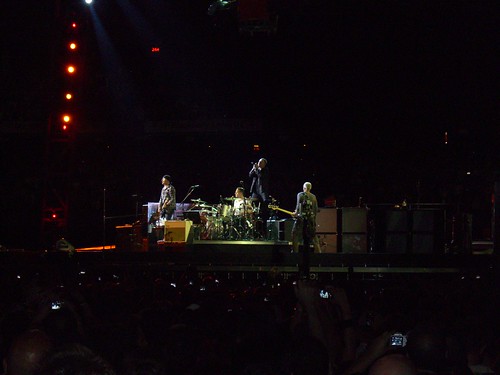 I am no longer a U2 virgin.

The band was in Toronto for two sold-out shows, and we went last night. It was great fun, a mix of new stuff and old favorites (including an acoustic version of "Stuck in a Moment"), an unbelievable stage and great atmosphere, with the roof of the Rogers Centre open and the lights coordinating with those of the CN Tower. And there's something about 60,000 people singing "Amazing Grace" that's a little humbling.

I also think I might've gotten a contact high, but that's another story . . .

Then, to an outside observer, it might seem as if I followed the band to New York. I did not -- although I did end up in the city for my first ever business trip. To some people, 16 hours in a car with your boss might seem like the worst idea anyone's ever had. But Dunkin' Donuts coffee will get you through some pretty scary things, including driving at 4:30 a.m. We actually went to Philly first, and while she was fawning over a friend's new baby, I was frolicking about in the Betsy Ross House and seeing the Liberty Bell. I also ran into a friend of mine (in a shoe store!) who I hadn't seen in years. I'm pretty sad that I missed the Rosenbach Museum & Library, which isn't open on Mondays, but that will be my first stop next time. And back to New York for longer than a night, for a change! I flitted about for a few days, heading to a meeting here, an event there, dining with Benjamin Bratt (that's right) and generally avoiding the NYU undergrads that were swarming around the East Village. (P.S. What am I doing in the East Village? Keetsa-ing, that's what!) Oh, and running into another friend who I hadn't seen in years.

Then it was home again, home again, jiggity-jig. Until next weekend, that is . . .
Collapse