Another birthday has come and gone, and mine was a really great time. Apparently I'm now on a strict diet of U2, since that morning I opened U2 tickets and found out that we're going to their concert here next month (I've been told that I'm expected to sing along to every song). It was also the last day of the Beaches International Jazz Festival. We went over for a couple of hours, sat in the beer garden, and caught Real Divas and Junior Watson. We also caught a few rain showers, and got caught in a downpour on the way home. (Ah, summer!) We then got all gussied up and went out for a fantastic dinner (including two bottles of champagne) at Starfish, followed by dessert back at our Local. It was there that I discovered my real gift . . . a bike!!! I'd been going on about it for ages, and I'm now the proud owner of a cruiser, complete with hand bell and removable basket. I've started riding it to work and plan on taking advantage for the remainder of summer!! 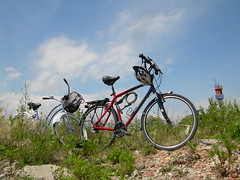 Speaking of bike riding, he also bought himself a (custom made) bike, so this past weekend we rode out to the Leslie Street Spit, which was basically a dumping ground for the rubble from building sites for a couple of decades. It has since been essentially reclaimed by nature, and is now home to a variety of plant animal species, as well as a bird research station. While we didn't take advantage of the walking trails, we did ride out to the tip of the spit, and had a picnic lunch under the lighthouse, watching the sailboats glide across the lake. I'm sensing more bike trips in the future, if the weather holds up. I wanted to head out east to the Scarborough Bluffs, but in the end, we both thought it might be a bit too far and a bit too steep for us at the moment. Soon enough, soon enough . . . it's nice to have goals.

Next weekend: Taste of the Danforth. Stay tuned.

(And yes, I KNOW I haven't posted pictures from Montreal. Yes, we went a couple of months ago. But they're coming. I promise. Hopefully sooner rather than later.)
Collapse