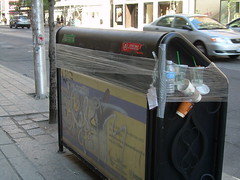 Yesterday was a very busy day.

Let me start by saying that somewhere around 24,000 municipal civil service workers are on strike in the city. At the crux of the issue is a debate over workers' sick days; currently, they're allowed to cash out their unused days upon retirement, which the city apparently can't afford. In short, that means that the parents of about 2,800 kids are scrambling around trying to find day care and there's no garbage collection. Yes, it's June. Yes, it's 86 degrees. Oh, those civil servants, hitting the city where it hurts!

(On a somewhat related note, workers at the Liquor Control Board of Ontario (LCBO) were also preparing for a strike today, meaning that no one would've been able to buy alcohol. Fortunately, the strike deadline was delayed while talks continued. Thank EFF.)

After work, I went down to The Ceili Cottage, the new workplace of a certain Irishman, for the opening night. The patio was packed, the front room (which dates back to the 1850s) was packed, and the bar (brand new and set under a glorious 52" flat screen) was packed. It was a good sign.

Then I came home and started to compost! We finally got a bin and after deciding that the deck wouldn't work (I know, I know), we put it out back. I'll keep you posted. Aaaaaaahahahaha.
Collapse