This being my first post of 2009, I'm going to start on a positive note. I feel that I've been a bit harsh on Toronto over the past few months -- partly because I've been comparing it to New York and missing some of the creature comforts that I'm used to in the States, neither of which is really fair. So in the spirit of the new year, and since I don't really make New Year's Resolutions, I'm going to state a few positive things about Toronto. 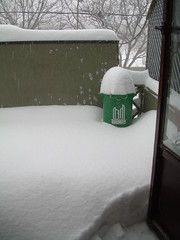 1. Subway etiquette. People actually stand to the side when subway doors open, allowing others to exit the train before getting on board. Imagine that.

2. The exchange rate. I know this isn't a constant (nor is it particular to Toronto), but I'm going to take as much advantage of it as I can!

3. Our apartment. It's the first place where I've lived in a long time that actually feels homey and comforting, and there's much more that we want to do with it . . . and I can't wait until it warms up again so I can get to gardening on the decks.

4. Snow. I may feel differently in March, but it's really nice to be somewhere where it snows in winter. Well, where it snows and actually hangs around for a little while. The snow on our front deck here was 16 inches (yes, I still function in English measurements) before Christmas!

5. The number of commercials featuring interracial couples. It may not seem like a big deal, but it's nice to see that some companies think that we are an important demographic and want our business.
Collapse